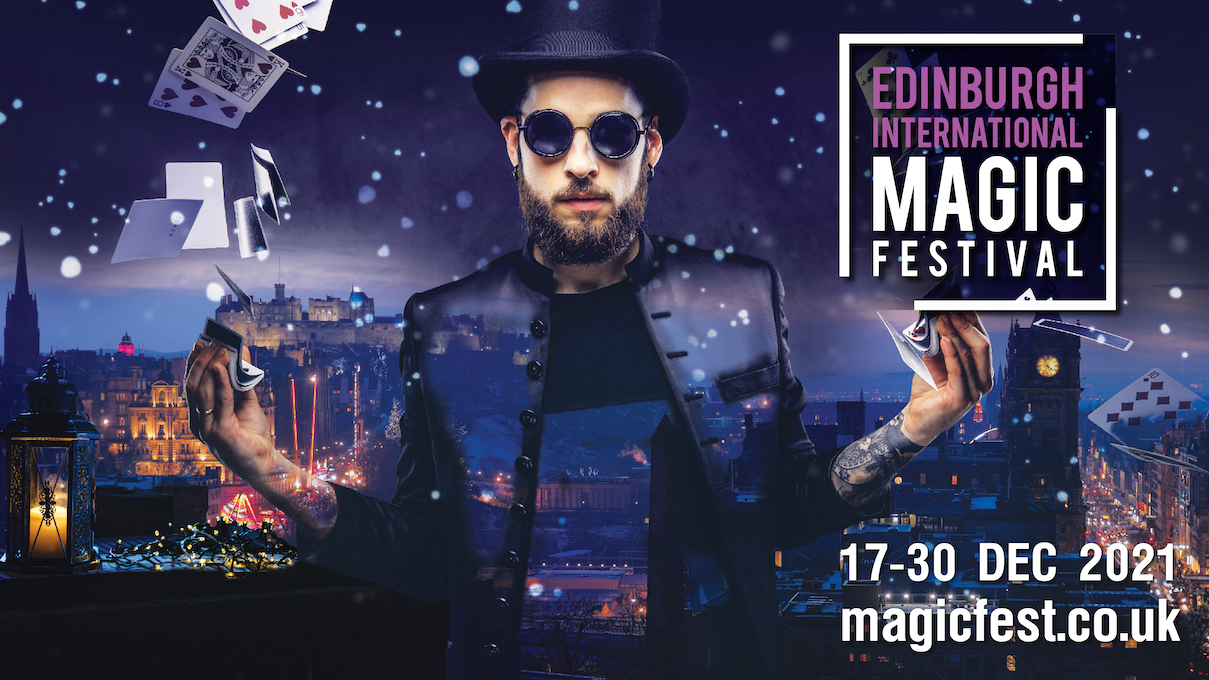 The festival runs from the 17th – 30th December, through the School Christmas Holidays, in venues across the city. Enjoy magic workshops, shows for kids, shows for babies, others for grownups, storytelling, live music and more. The festival has a packed line up of some of the best Scottish performers and magicians straight from the Magic Circle!

For Artistic Director Kevin Quantum, magic is much more than just tricks:

“For me magic is about bringing joy into people’s lives, providing a moment of escapism, and offering a mesmerising, impossibly brilliant alternative view of reality. Magic makes you feel like a kid again, connecting you with that part of you that’s wonderfully naive, superbly silly, and open minded to really believe in magic and the impossible. Come enjoy a show and be that kid again!”

MagicFest aims to bring magic into the lives of as many diverse communities as possible and this year part of the programme takes place out of the city centre at North Edinburgh Arts in Granton, an area recognised as one of the most deprived in the city. Events include a wizarding workshop for kids aged 7-10 years old and a family-friendly magic show with Magic Circle member Gary James – both taking place on the final day of Edinburgh school term; Friday 17th December.

For the first time in its 12-year history, MagicFest will present shows for children aged 0-3 years old. ‘Snow Tale’, produced by Scottish playwright and actor Natalya McDonald in collaboration with creative producer Svetlana McMahon and will be on at the Scottish Storytelling Centre 27th December. This delightful show is about love, family and home, with magic, sensory games and a ‘buzzing’ disco.

Festival Director Svetlana McMahon says: “We’re superbly proud of our 12-year-old festival and ready to deliver our ‘come back’ programme of live events and new productions for Christmas 2021. Innovation relies on connection and creativity from shared interactions, and that has been difficult recently, however we’re still producing new events at the festival such as ‘Snow Tale’ – our first ever show produced for babies and toddlers. Everything is magical for children that age, and we want parents to share in the experience with their wee ones at our shows.”

The Storytelling Centre, a stunning & modern theatre in the heart of the old town, is also home to many other performances. Con Artist, card sharp and star of BBC’s ‘The Real Hustle’ R. Paul Wilson heads the line up alongside London based Laura London, bringing her hit West End show ‘Cheat’ to the festival. Fringe sell-out sensation, Kevin Quantum performs ‘The Trick That Fooled’, a show demonstrating magic tricks that have fooled some of the smartest and most creative people from the last 100 years. He’s joined by Fringe favourites Elliot Bibby and Magic Gareth with famous Edinburgh family performers Gary James and Tricky Ricky completing the line-up with their hilarious family shows.

The final festival performance ‘Hogmanay House’ fuses magic with storytelling and live music. Charting the history and origins of Hogmanay in a delightful 75-minute performance at the exquisite Royal Scots Club in the Edinburgh New Town, on the 30th December – just before the bells! Featuring an all-star cast; Scottish Singer Songwriter Ainsley Hamill (Featured in The Guardian Album of the Month 2021) alongside talented musician/composer Ron Jappy, silver-tongued Storyteller and wand-maker Jock Ferguson, sleight-of-hand maestro Lewis Barlow and mentalist Drew McAdam.

This years’ festival has received support from the City of Edinburgh Council as part of Local Cultural Event Fund.

Councillor Donald Wilson, Edinburgh’s Culture and Communities Convener, said: “We’re delighted to support the Magic Fest as it makes its return with a full festive programme of live events. There really is fun for all the family this Christmas and I’m looking forward to the return of Hogmanay House which showcases a unique Hogmanay offering complimenting traditional end-of-the-year events in the Capital.”

Rescheduled MagicFest Shows on in March/April 2022 & during Easter Hol...
Scroll to top